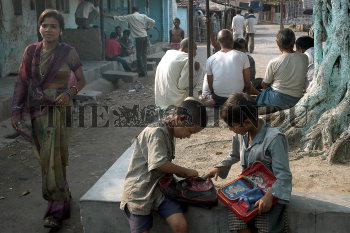 Caption : JUTE mill workers and their families are passing through a hard time at Shyam Nagar workers quarters on February 27, 2007. The 54 Mills across West Bengal are closed from January 05, 2007. The mill workers are poignant today, when the trade unions could not solve the issue at a tentative duration. The indefinite strike was called with various demands under the banner of CITU and INTUC. Many of the jobless workers who hail from the neighboring state Bihar, Jharkhand and Orissa left for their respective place as the strike moved beyond the expected time. But many of them could not move as their children appearing for the final exams. The Majdoor Lines (Workers Quarters) around the JUTE mills in Shyam Nagar, Titagarh, Jagaddal in North 24 Parganas near Kolkata have become lifeless with few forlorn people moving around and the Parivar (women and children) struggling to survive. When they were asked about the Budget, none of them could understand what it was and why it takes place every year. Photo: A. Roy Chowdhury