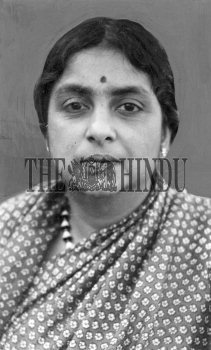 Caption : Kamaladevi Chattopadhyaya was born in 1903 in a wealthy Saraswat family of south Karnataka. She was married young and became a widow while at school.But she broke from orthodoxy to assert her individuality when she next married Harian Chattopadhyaya. She was a frontrank leader in the women's movement in India. She joined the Congress Socialist Party in 1948. She was a member of the All India Congress Committee and also the Organising Secretary of the Working committee, president and vice president, All India Women's conference. President of Indian Cooperative Union and Chairman, All India Handicrafts Board. She was also a chairman of All India Designs Centre, and vice president, World Crafts Council. She is the recipient of the Watumall Award ( 1962) and of the Magasaysay Award for community leadership (1960). She passed away on October 29, 1988.