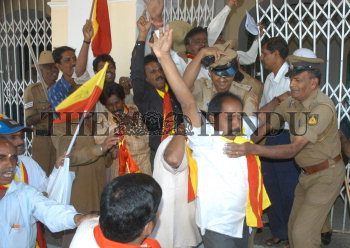 Caption : MYSORE: Police arresting members of Kannada organisations when they tried to barge inside the office of deputy commissioner in Mysore on February 24, 2007 protesting against the final verdict of Cauvery Tribunal. Photo: M. A. Sriram