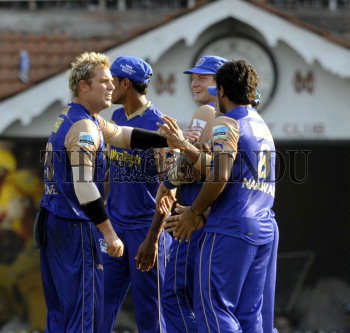 Caption : CHENNAI: 03/04/2010 : Shane Warne (left) of Rajasthan Royals celebrates with teammates after taking the wicket of Suresh Raina of Chennai Super Kings during their match in the third edition of the DLF Indian Premier League Twenty20 cricket tournament at the M.A. Chidambaram Stadium in Chennai on April 03, 2010. Photo: K. Pichumani