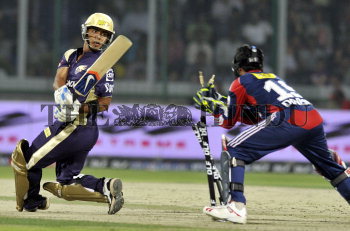 Caption : New Delhi, 29/03/2010: Kolkata Knight Riders batsman Mandeep Singh is being stumped by Delhi Daredevils wicketkeeper Dinesh Karthik off the bowling of Amit Mishra during their match in the third edition of the DLF Indian Premier League Twenty20 cricket tournament at the Ferozeshah Kotla Ground in New Delhi on March 29, 2010. Photo: S. Subramanium