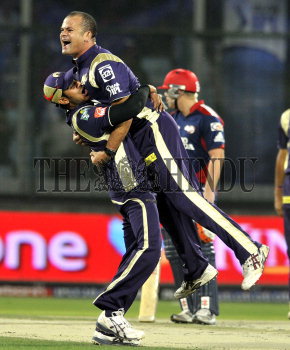 Caption : New Delhi, 29/03/2010: Kolkata Knight Riders bowler Charl Langeveldt celebrates with Manoj Tiwary after getting the wicket of Gautam Gambhir (not in pic) in the match against Delhi Daredevils in the third edition of the DLF Indian Premier League Twenty20 cricket tournament at the Ferozeshah Kotla Ground in New Delhi on March 29, 2010. Photo: S. Subramanium