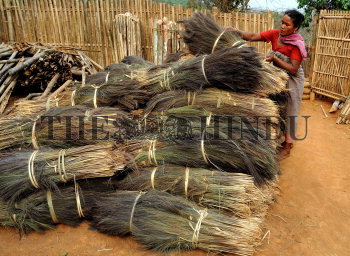 Caption : KARBI ANGLONG--29-03-2010 A TIWA tribal woman drying her harvested Broom sticks (Thysanolaena maxima) in Tharakunji village in Karbi Anglong district of Assam state about 150km away from Guwahati on Monday, March 29, 2010. Broom grass has emerged as the most widely cultivated crop in the hills of Karbi Anglong district of Assam. Cash crops like broom grass is grown in the Jhum fields by the TIWA community people as a mixed crop, so that the next year they could harvest the crop as an additional income from the fallow land. The harvesting seasons of broom starts from January to March and the peak season of marketing is between February and April. About 90% of the production is sold during these months. Karbi Anglong is the largest producer of brooms in the entire country from where it goes to every household. PHOTO: RITU_RAJ_KONWAR