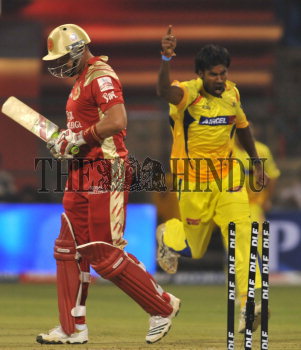 Caption : Bangalore: 23/03/2010. L. Balaji of Chennai Super Kings celebrates after taking the wicket of Jacques Kallis in the match against Royal Challengers Bangalore in the third edition of the DLF Indian Premier League Twenty20 cricket tournament at the Chinnaswamy stadium in Bangalore on March 23, 2010. Photo: K. Bhagya Prakash