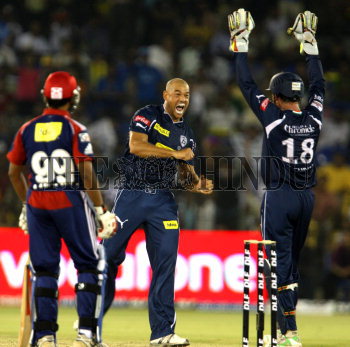 Caption : CUTTACK: 21/03/2010: Deccan Chargers bowler Andrew Symonds celebrates with wicketkeeper Adam Gilchrist after taking the wicket of Amit Mishra during the match between Deccan Chargers and Delhi Daredevils in the third edition of the DLF Indian Premier League Twenty20 cricket tournament at the Barabati Stadium in Cuttack on March 21, 2010. Photo: K.R. Deepak