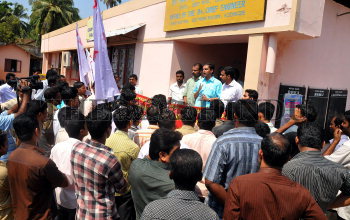 Caption : KOZHIKODE, 19/03/2010: Activists of DYFI staging a demonstration in front of deputy Chief Engineer's office of Railways in Kozhikode on March 19, 2010 in protest against the shifting of the supervision office of five railway works on the Kozhikode-Shoranur stretch to Pothannoor. Photo: S. Ramesh Kurup