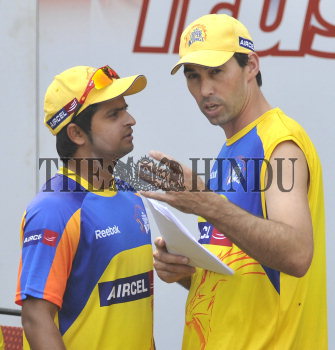 Caption : New Delhi, 18/03/2010: Suresh Raina of Chennai Super Kings is getting a few tips from coach Stephen Fleming during the practice session on the eve of their DLF IPL Twenty20 cricket match against Delhi Daredevils at the Ferozeshah Kotla ground in New Delhi on March 18, 2010. Photo: S. Subramanium