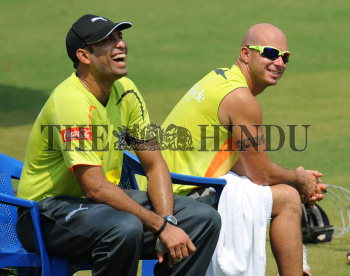 Caption : CUTTACK: 18/03/2010: V.V.S. Laxman (left) and Herschelle Gibbs of Deccan Chargers in a jovial mood during the practice session on the eve of their match against Kings XI Punjab in the third edition of the DLF Indian Premier League Twenty20 cricket tournament at the Barabati Stadium in Cuttack on March 18, 2010. Photo: K.R. Deepak