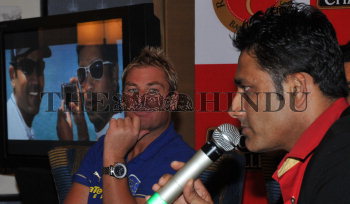 Caption : Bangalore: 17/03/2010. Cricketers, ANIL KUMBLE and Shane Warne during the release of the book 'Wide Angle' by ANIL KUMBLE in Bangalore on March 17, 2010. Photo: Bhagya Prakash