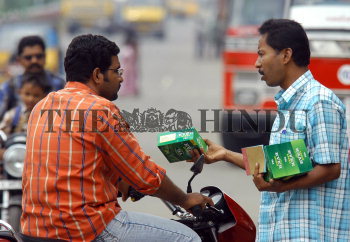 Caption : A vendor selling tea packets in the streets of Kochi city, Kerala. Tea exports from the country topped 200 million kg mark to reach total exports of 203.86 mkg in 2006, the highest figure in three years. The country's gaining market share in the Pakistani market, which consumes 140 mkg annually, and the severe drought which hit Kenyan production in the first half of the year helped improve Indian exports. Photo: K.K. Mustafah 21/02/07