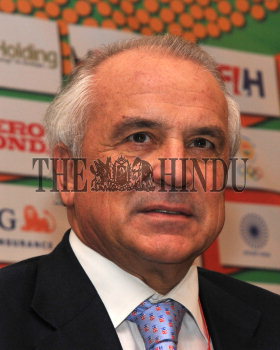 Caption : NEW DELHI: 27/02/2010: Leandro Negre, President, International Hockey Federation (FIH), during an interaction with media while Indian media boycotted his press conference to protest against not allowing the scribes to enter the Main Stadium to cover the practice session on the eve of the Hero Honda World Cup hockey tournament, in New Delhi on February 27, 2010. Photo: Rajeev Bhatt