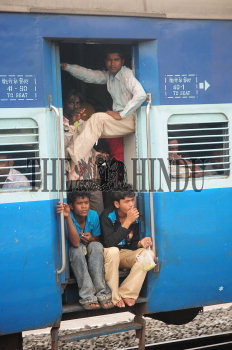 Caption : VIJAYAWADA , 24/02/2010: Passengers try to find space in the general compartment of a train in Vijayawada station on February 24, 2010, a few moments after Union Railway Minister Mamata Banerjee presented the budget for 2010-11 with no increase in passenger fares. Vijayawada stood to gain by introduction of only one new passenger train to Chennai via Guntur. Photo: Ch. Vijaya Bhaskar