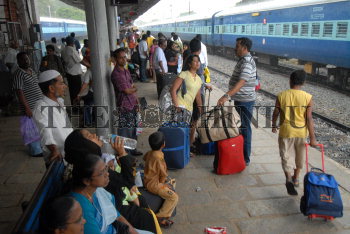 Caption : BANGALORE, 24/02/2010: Passengers waiting at platforms in Cantonment Railway Station in Bangalore. The Railways freight and passenger facility in the Railway Budget 2010-2011 presented in Parliament on February 24, 2010. Photo: K. Gopinathan