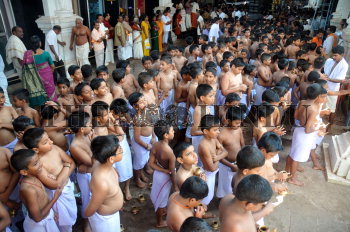 Caption : THIRUVANANTHAPURAM, 20/02/2010: Children, who have come for the `Kuthiyottam' offering, being held as part of the Pongala festival at Attukal temple, in Thiruvananthapuram on February 20, 2010. Photo: C. Ratheesh Kumar