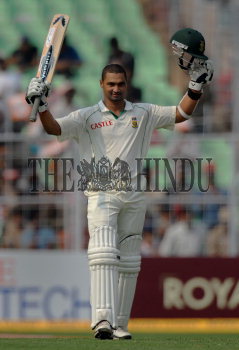 Caption : KOLKATA: 14/02/2010: South Africa's Alviro Petersen celebrates after scoring a century on the first day of the second and final cricket Test match between India and South Africa at the Eden Gardens in Kolkata on February 14, 2010. Photo: K.R. Deepak