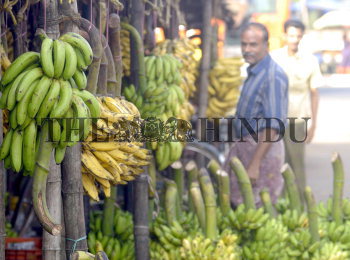 Caption : Banana kept for sale at a vegetable market near Thrissur in Kerala on Monday. Banana is an important fruit crop accounting for 32 per cent of total fruit production in India with a total estimated annual production of 19.19 million tonnes from 0.565 million hectares. India is credited to have emerged as a largest producer of banana with an unprecedented yield increase.This has been possible due to adoption of improved production technologies which include high density planting, use of in vitro plants, fertigation and management of insect pests and disease. High density planting (HDP) normally refers to a closer spacing than the usual recommended spacing. Choosing the correct planting density is very important for bridging the GAP between the actual yield and the potential yield from unit area. Increasing the plant density by planting more number of suckers per pit and its impact on productivity and Benefit Cost Ratio was tried. Says studies from Kerala Agriculture University Banana Research Station. Photo: K_K_Mustafah 1/02/2010