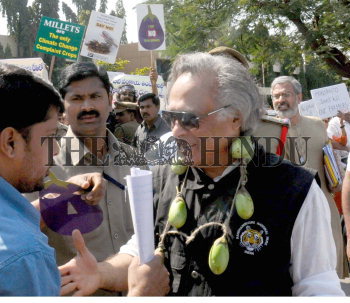 Caption : HYDERABAD:31/01/2010:-PROTESTING IN TRUE SPIRIT! Activists opposing bacillus thoringiensis BT-brinjal though it appropriate to greet Union Minister of State for Environment and Forests Jayaram Ramesh with brinjal garland while he was coming out of the national consultation on BT-Brinjal held in CRIDA at Hyderabad on Sunday. An activist is seen shaking hand with the minister after garlanding him.Ramesh said this was the first time he was facing such an unbecoming and unwarranted protest. Photo: Mohammed_Yousuf