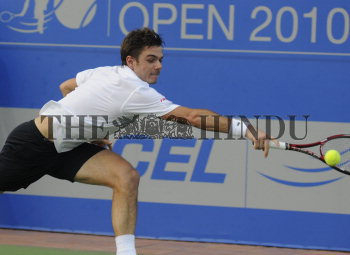 Caption : CHENNAI, 10/01/2010: Stanislas Wawrinka of Switzerland in action against Marin Cilic of Croatia during the singles final of the Aircel Chennai Open 2010 tennis championship in Chennai on January 10, 2010. Photo: R. Ragu