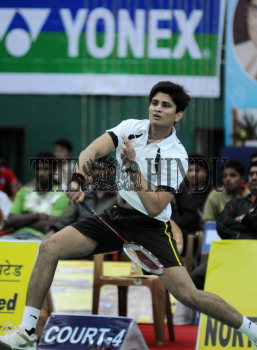 Caption : GUWAHATI, 08-01-2010: B. Chetan Anand of PSPB seen in action against Rohan Castelino of Karnataka (unseen) in the men's singles quarterfinals of the 74th senior National badminton championship at the Karmavir Nabin Chandra Bordoloi Indoor Stadium in Guwahati on January 08, 2010. B. Chetan Anand won the match and entered the semifinals. Photo: Ritu Raj Konwar