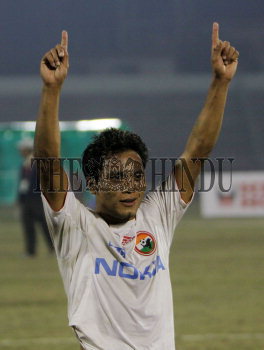 Caption : GUWAHATI, 30-12-2009: Seikhohau Tuboi of Shillong Lajong FC celebrates after scoring the goal against Churchill Brothers during the semifinal of the 31st Federation Cup football tournament at the Jawaharlal Nehru Stadium in Guwahati on December 30, 2009. Shillong Lajong FC entered the final by winning the match 1-0. Photo: Ritu Raj Konwar