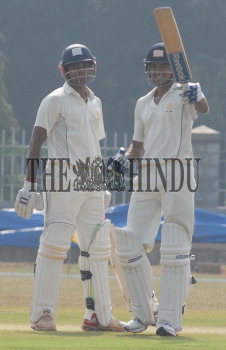 Caption : MYSORE: Karnataka's Manish Pandey waving his bat to the crowd after scoring a century as R. Vinay Kumar looks on during the Ranji Trophy quarterfinal match against Punjab at the Gangothri Glades Ground in Mysore on December 26, 2009. Photo: G.P. Sampath Kumar