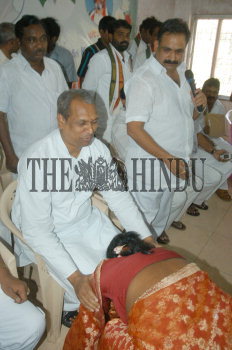 Caption : A Congress candidate who is in the fray for GVMC elections touching the feet of the Minister for Commercial Taxes Konathala Ramakrishna while Visakha-1 MLA city Congress president Dronamraju Srinivas looks on at a meeting in Visakahapatnam on February 08, 2007. Photo: C.V. Subrahmanyam