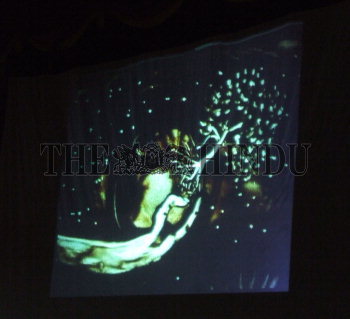 Caption : TIRUCHI: French artist DAVID Myriam's Sand Animation performance as a grand finale of technical festival Pragyan'07 at National Institute of Technology in Tiruchi on February 07, 2007. 37-year-old DAVID engaged in various forms of arts such as poetry, drawing on paper, animation films, rendered images woven around the themes of 'The birth of the Earth' and 'The Dunes' by drawing gestures by hand and made it visible on a light board. The display was projected on a screen using an overhead projector. Photo: R. Ashok