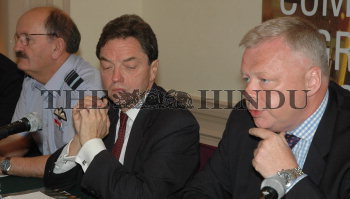 Caption : British High Commissioner to India Michael Arther (centre), Alan Garwood (right), Head of Defence Export Services in the British Ministry of Defence, and Air Vice Marshal H. G. MACKAY (left), at the press conference to announce the U.K. delegation as one of the largest at Aero India 2007, in Bangalore on February 06, 2007. Photo: G.P. Sampath Kumar