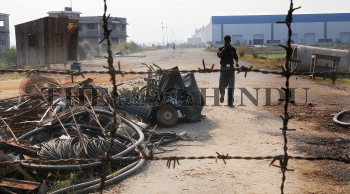 Caption : Kolkata: The half finished factory of Tata Motors on Singur land wears a deserted look more than year after the company decided to withdraw from the proposed Nano car project on Sunday. West bengal Government's bid to rope in Bharat Heavy Electricals Ltd., Which is scouing for land for setting up a power project, too has drawn blank as the BHEL officials, after visiting Singur a few weeks ago, have opined against the location as a probable site for the power project. Mealwhile, Ms. Mamata Banerjee, while laying foundation-stone for the country's first rail-linked PERISHABLE cargo complex at Singur on Sunday, renewed her appeal to the West Bengal Government to offer the land to the Railways to set up a coach factory in joint venture. Photo: Arunangsu Roy Chowdhury November 29 , 2009.