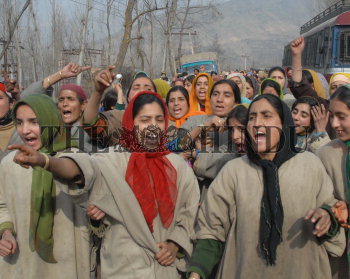 Caption : Kashmiri Muslim villagers shout anti-police slogans , after the bodies of Molvi Showket Ahmad Khatana and Gulam Nabi Wani were exhumed at Ajus near Srinagar on February 03, 2007. Strong protest rocked Kashmir valley for the second day over the killing of civilians in FAKE encounters by Special Operation Group (SOG) and falsely identifying them as Pakistani militants. Indian police had to fire in air to disperse thousands of angry villagers in Ganderbal today when forensic experts were exhuming the body of, Nazir, another civilian also killed by the SOG men in custody, news reports said. Photo: Nissar Ahmad 03-02-2007