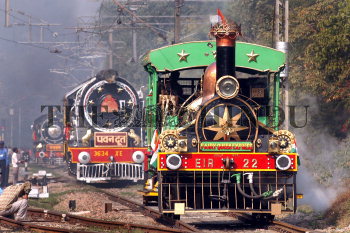 Caption : The Fairy Queen, said to be the world's oldest locomotive in working condition is followed by Pawan Doot during a parade of steam engines in New Delhi on February 02, 2007. Five working steam locomotives were displayed as part the Northern Railway's Rail Heritage month celebrations. Photo: S. Subramanium