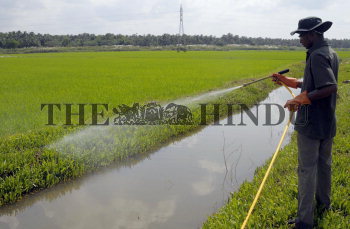 Caption : Farm worker SPRAYING PESTICIDE at paddy field near Thrissur in Kerala on Thursday. PESTICIDE solution has been sprayed in about 90 per cent of the army worm-infested paddy fields in Pullazhi, according to officials. Outbreak of army worm or swarming caterpillar (Spodoptera species) has been reported in about 3,000 acres of Kole land. Photo: K_K_Mustafah 19/11/09