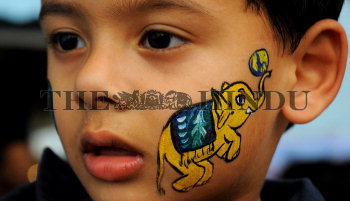 Caption : HYDERABAD, 18/11/2009: ?Gajju? a golden elephant painted on the cheek of a tiny tot who had come to watch a film being screened at Prasad IMAX Theatre during ongoing 16th International Children's Film Festival (ICFF) in Hyderabad on November 18, 2009. Photo: Mohammed Yousuf