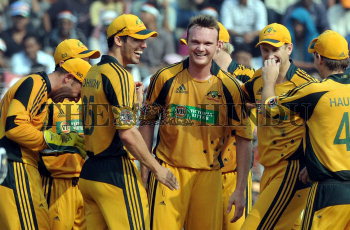 Caption : GUWAHATI, 08/11/2009: Australia's Doug Bollinger celebrates with Mitchell Johnson and teammates after the fall of Yuvraj Singh's wicket during the sixth One Day International cricket match between India and Australia at the Nehru Stadium in Guwahati on November 8, 2009. Photo: S. Subramanium