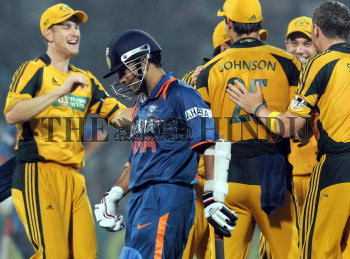 Caption : NEW DELHI: 31/10/2009: India's Sachin Tendulkar walks back after being run out by Mitchell Johnson of Australia during the third match of the Hero Honda Cup one-day international cricket series between India and Australia at the Ferozeshah Kotla Ground in New Delhi on October 31, 2009. Photo: S. Subramanium