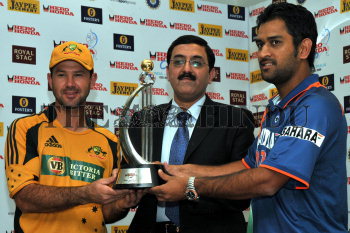 Caption : VADODARA: 24/10/2009: India's captain Mahendra Singh Dhoni (right), Australia's captain Ricky Ponting and Hero Honda's Sales and Marketing Head Anil Dua at the unveiling of the trophy on the eve of the opening game of the seven-match Hero Honda Cup ODI series between India and Australia, in Vadodara, on October 24, 2009. Photo: S. Subramanium