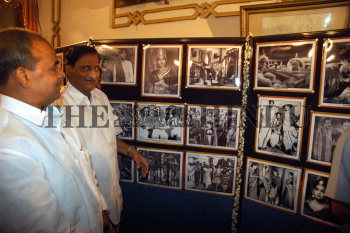 Caption : Chief Minister Y.S. Rajasekhara Reddy having a look at the black and white still photographs of the yesteryear's stars before the launch of the PLATINUM JUBILEE CELEBRATIONS of the telugu film industry in Hyderabad on January 25, 2007. Producer Seshagiri Rao is also seen. Photo: Mohammed Yousuf