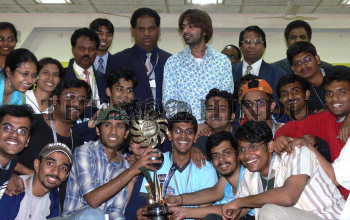 Caption : Members of the SASTRA team from Thanjavur which won the first prize in the cultural events in Riviera '07 posing with the championship trophy along with actor T.R. Silambarasan who was the chief guest at the valedictory function held at the VIT University campus in Vellore on January 25, 2007. VIT University Chancellor G. Viswanathan (standing second from right), Pro-Chancellor (Administration) G.V. Sampath (fourth from right) and Pro-Chancellor (Academic) Sankar Viswanathan (extreme right) are also seen. Photo: D. Gopalakrishnan