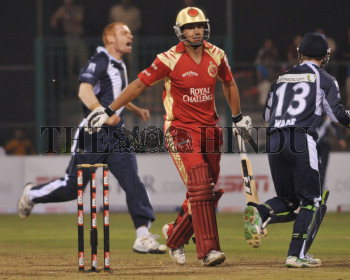 Caption : Bangalore: 15/10/2009. Ross Taylor of Royal Challengers Bangalore walks back after he was dismissed lbw by Andrew McDonald (left) of Victoria Bushrangers in the Airtel Champions League Twenty20 cricket tournament at the Chinnaswamy Stadium in Bangalore on October 15, 2009. Photo: K. Bhagya Prakash