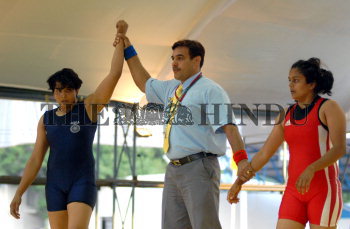 Caption : Bhopal: SUMAN Kundu (blue) from Haryana (A) won the gold medal in the women's 67 kg category in the National wrestling championship at the Motilal Nehru Stadium in Bhopal on October 10, 2009. SUMAN Kundu beat Kamini from Delhi (B) in the final. Photo: A.M. Faruqui