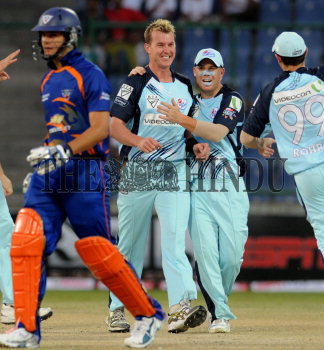 Caption : NEW DELHI: 09/10/2009: Brett Lee of New South Wales Blues celebrates with teammates after getting the wicket of Rilee Rossouw of Diamond Eagles during their match in the Champions League Twenty20 cricket tournament at the Ferozeshah Kotla ground in New Delhi on October 09, 2009. Photo: S. Subramanium