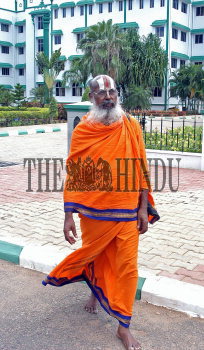 Caption : MADURAI, 29/09/2009: Swami Govindaramanuja Dasa coming out of the Madurai BENCH of the Madras High Court after arguing a case before the Chief Justice on September 29, 2009. Swami Govindaramanuja Dasa, president of the International Sri Vaishnava Dharma Samrakshana Society based in Tiruchi, had filed the case against the construction of a public lodge on the premises of a 'nandhavanam' (garden) whose flowers were used to adorn the deities of the Srirangam Ranganathaswamy temple. Photo: K. Ganesan