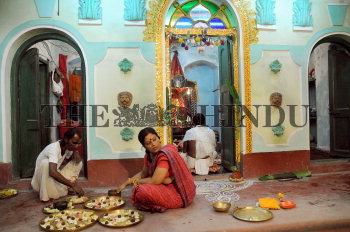 Caption : Kolkata: PHOTO STORY: (Please try to use more than one pics with the story) Around 438 years old puja at the house of Halders family in Kolkata is in full swing on Maha Saptami day. Besides the big budget Durga Pujas organised by several communities and clubs, the Pujas held in the houses of erstwhile Zamindars (landlords) in Kolkata still manifest the grandeur and opulence, glitz and colour, culture and tradition of the ?City of Joy?. The five-day-Puja extravaganza begins here with Maha Sasthi but the actual celebration starts from Maha Saptami, when everybody congregates at the banks of holy Ganges with banana shoots and worship it after dipping it into the water. After returning home with a pot full of the holy water, worship of the goddess starts through various rituals. The rituals have different stages, which continue through the Maha Astami, Maha Navami and Bijoya Dashami. Apart from the eastern part of India, Durga Puja or Navaratri is widely celebrated in various parts of the country. Many non-residential Bengali cultural communities organise ?Durgotsav? in the countries like the United States of America, United Kingdom, Australia, Germany and France. The festival brings joy, happiness and togetherness to the lives of Bengalis across the world. People wear new clothes, go pandal-hopping and take part in the proceedings of the Puja. The ?Babu? culture reflects the erstwhile Zamindari lifestyle of traditional families residing in the northern part of the city and is still maintained with pride. Men clad in traditional dhoti and women draped in white sarees with red borders ? its quintessential Bengali culture at its best. To cope with the swelling crowd dring the festivities, the State Government also gears up with various security measures and ensuring effective transport management to avoid traffic congestion. Photo: Arunangsu Roy Chowdhury. September 25, 2009.