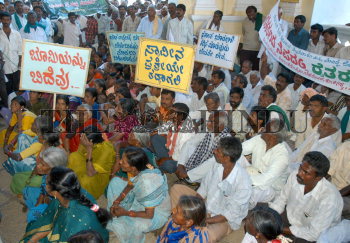 Caption : MYSORE: Farmers from Mysore and Mandya districts in front of the deputy commissioner's office in Mysore on January 22, 2007, protesting against the KIADB's move to acquire fertile farm land in Mysore and SRIRANGAPATNA taluks for industries. Photo: M.A. Sriram