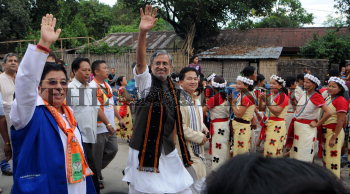 Caption : ARUNACHAL PRADESH, 19/09/2009: Deputy Chief Minister of Bihar Sushil Kumar Modi (in right) along with BJP candidate for the 13th Itanagar (ST) Assembly Constituency Lichi Legi (in left) attending an ELECTION rally in Naharlagun near Itanagar capital of Arunachal Pradesh about 420 km away from Guwahati city on September 19, 2009. BJP has also released their party manifesto for the forth coming Assembly ELECTION for 60 assembly seats which is scheduled to be held on October 13th , 2009. The main issue in this assembly ELECTION this time is the agration from Chinese side in Arunachal Pradesh and Corruption. Photo: Ritu Raj Konwar