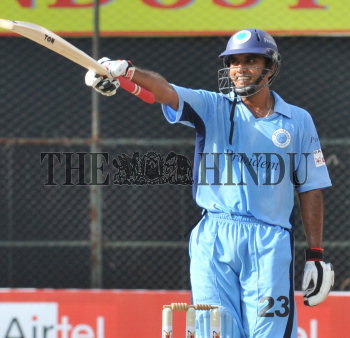 Caption : Bangalore: 09/09/2009. M.K. Manjunath of Provident Bangalore celebrates after reaching his half-century during the match against Mangalore United in the Mantri Karnataka Premier League Cup Twenty20 cricket tournament at the Chinnaswamy Stadium in Bangalore on September 09, 2009. Photo: K. Bhagya Prakash