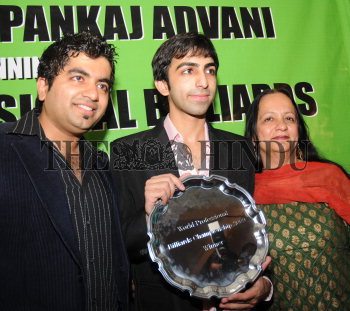 Caption : BANGALORE, 08.09.2009 : Pankaj Advani, the newly-crowned World Professional Billiards champion, along with his brother Shree (left) and mother Kajal, showing his trophy during a felicitation function at the Karnataka State Billiards Association, in SHIVAJINAGAR in Bangalore on September 08, 2009. Advani defeated nine-time champion Mike Russell in the final of the World Professional Billiards tournament at Leeds in the United Kingdom. Photo: K. Murali Kumar