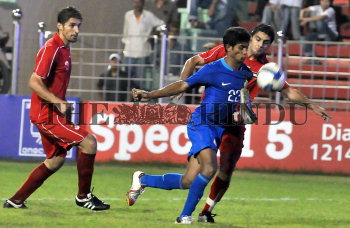 Caption : New Delhi, 29/08/2009: Syed Rahim Nabi (22) of India and Bakri Tarab of Syria fight for the ball as Ali Dyab (left) of Syria looks on during the ONGC Nehru Cup football tournament at Ambedkar Stadium in New Delhi on August 29, 2009. Photo: S. Subramanium