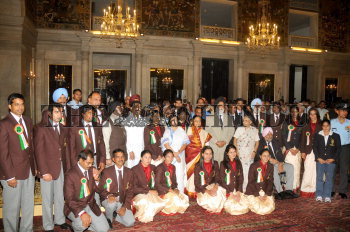 Caption : New Delhi, 29/08/2009 : The recipients of the Sports and Adventure AWARDS 2009 with the President Pratibha Patil, Railway Minister Mamata Banerjee, and Sports and Youth Affairs Minister M.S. Gill, at the Rashtrapati Bhavan in New Delhi on August 29, 2009. Photo: Rajeev Bhatt