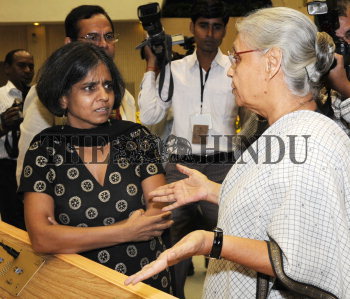 Caption : NEW DELHI, 18/08/2009: Delhi Chief Minister Sheila Dikshit with Sunita Narain, Environment activist and Director of Centre for Science and Environment, at the National Conference of Ministers of Environment and Forests from States and Union Territories, at Vigyan Bhavan in New Delhi on August 18, 2009. Photo: V.V. Krishnan